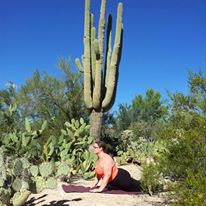 Part 1 of this Blog talked about Shakti as the force of Nature that is within and around us.  It is the very spark of prana that animates us and creates our Universe.  I introduced you to the idea of not only moving in yoga poses from a physical perspective, but of also adding in the dynamic of moving prana through the body.  Conscious awareness and cultivation of Shakti can be very beneficial.

In this blog I’ll talk a little more about Shakti and Shiva and divine potent energy; but also suggest another practice using breath and meditative technique to work with this sacred temple, our body.

There are distinctive types of Shakti inside and outside of us that are experienced in different forms and different levels. Kundalini-Shakti is the most significant form of Shakti. Seen in nature as electrical energy and magnetism, Kundalini-Shakti is also the internal hidden Shakti coiled at the base of our spine, often metaphorically represented as a coiled, sleeping snake.  It can be viewed as feeling stagnant, heavy, lacking a sense of lightness and flow in our bodies.

The complementary force to Shakti is Shiva: universal consciousness. Without the animating power of Shakti, Shiva lies asleep. Internally, Shiva resides dormant at the crown chakra. Shakti is described as a coiled female serpent slumbering at the base of the spine waiting to be roused and guided up the subtle body nerve channel of the body.  This channel (known as the Sushumna) moves through 7 main hubs of energy, called the Chakras, waking each along the way.  Finally, at the last Chakra in the head, Shakti energy is united with the Shiva male energy, representing Transformation.  This is known as the path of liberation, with transformation taking many different ways.

As you increase the amount of Shakti in your body, your chakras and nadis adjust to contain the additional energy and clarity of Shakti.   This then increases an output of Shakti energy in the body, not unlike the false high of caffeine; however, much more sustainable over time. As more Shakti flows in our body, it manifests in its many forms to produce creativity, inspiration, intellect, wisdom and will.  With this shift in our bodies and psyches, there can be an increased sense of confidence and self esteem.  On a physical level, the nervous system is more alive, spinal fluid traveling more easily; greater mental clarity and increased vitality begin to be noted.  With regular practice, conscious movement, breath practices and meditation on the energy channels of the body can reduce tension, increase flexibility, stability and prevent issues caused by sedentary lifestyles.